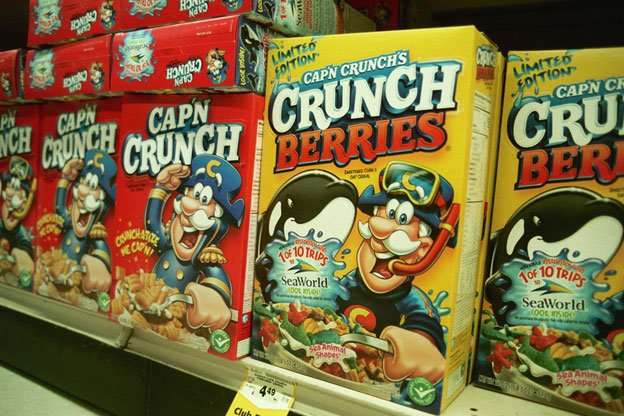 What do Fudgesicles, Froot Loops, and Cocoa Krispies have in common?

These sugar-laden snacks, along with hundreds of other similar ones (Graham snacks, Breyers Smooth & Dreamy ice cream, and Mac & Cheese are a few others) all fall into the same category: They’re all “smart nutrition choices.”

Think I’m making this up? I wish I was!

The food industry’s got one heck of a sense of humor, and this is the latest of its jokes. Our nation’s largest food manufacturers have come up with a food labeling system that, according to their spokespeople, “helps shoppers make smarter food and beverage choices within product categories in every supermarket aisle.”

This system concludes of a green “Smart Choice” check mark that’s to appear on every item they decide to be nutritious. The problem is, a quick scan over the “approved” list of foods will leave you seriously confused as to just who is making these decisions.

I’m thinking it’s one of the Kellogg’s exec’s kids. Or maybe a whole bunch of kids whose parents run the offices of Kraft, Conagra, General Mills, and a few other major food manufacturers, all sitting in the boardroom, deciding on which cereals and popsicle flavors will make the cut.

“Don’t forget to put Apple Jacks on the list, Johnny!” “I vote for the Cocoa Puffs and Lucky Charms, so don’t leave those off!” “Yes, and the Rice Krispies and Cheese Nips for me, Beckie!”

I honestly can’t imagine most of these “smart choice” selections making it onto an “approved” list of any nutritionist — or even health-conscious individual — so it had to have gone down just like that.

Sure, most of you are pretty well aware of the fact that sugary, colorful cereals and sodium-laden, over-processed frozen meals are in no way “smart” when it comes to food choices, but what about the average consumer?

What about the millions upon millions of people who don’t do their research online prior to hitting the supermarket isles? What about all those moms who’ll feed their children this full fledged junk, thinking that Rice Krispies now provide the same nutrition that an actual, whole food meal would provide?

The majority of the American public will take notice of the endless TV advertisements letting them know that the food industry, having their best interests at heart, will now dutifully guide them through their grocery shopping trips by placing a highly visible, bright green check mark on all the “good for you” foods!

When questioned about the program’s decision-making criteria, Dr. Eileen Kennedy, the president of the Smart Choices board, has said that all of the program’s choices are based on government’s dietary guidelines and nutritional standards.

I don’t know if this is surprising to you, but to me, it says nothing. I’ve been well aware of FDA’s nonsense ever since the first time I saw the food pyramid (you know, the “Make bread, bagels, crackers, and other refined carbs the primary source of your caloric intake” one.).

The government could be to blame — but only indirectly, as the Smart Choices program wasn’t started by the FDA or any other government organization. Instead, it’s a privately run program into which each participating company — ten in total (including Kraft, General Mills, Pepsi, Tyson, Kellogg’s, and five others) buys a membership, valued at $100,000 yearly.

Yes, you read that right, a privately started program is currently making a million bucks a year by allowing major food manufacturers the use of its “Smart Choice” check mark logo.

Upon doing a little research, I found that, contrary to my initial instinct, the panel of Smart Choice decision makers is, indeed, comprised of adults. Adults who represent the interests of the participating food manufacturers (being that they’re members of these corporations), but adults nonetheless.

I don’t know about you, but this whole thing is really hilarious to me! You’ve basically got a bunch of major food corporations getting together and deciding which foods they want to sell more of.

They then advertise these foods as being of superior nutritional value, and promote them as such to the unsuspecting general public, who assume that the food industry honestly does have their best interests at heart and isn’t the least bit concerned with increasing their own profits.

As funny as this whole thing may be to me, I do realize that millions of kids in our country will now be eating more sugar cereal and frozen meals in a month than they should even see in a year — all while their moms keep on buying more, thinking that their babies are getting the best nutrition possible, courtesy of the green check mark.