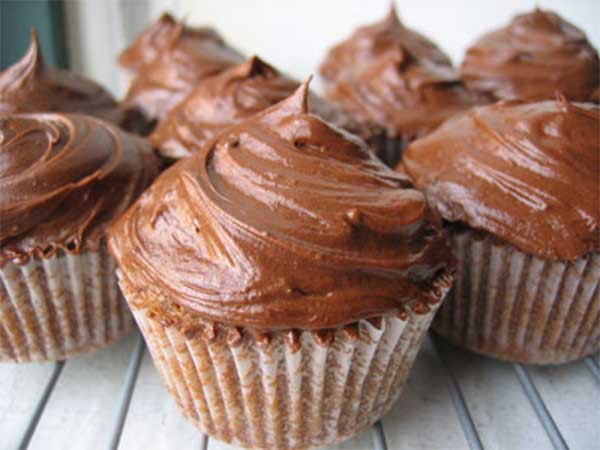 This is one incredible dessert that’s still low in carbs and completely guilt-free. Very easy to make, looks extremely impressive, and tastes unbelievably decadent! This recipe even comes with frosting, which adds an additional few grams of carbs per serving but may be easily omitted.

Preheat oven to 325°F. Whip egg whites and cream of tartar with a mixer to stiff peaks. Separately, combine butter with egg yolks and whip with a mixer until light and fluffy. Add extracts and Splenda, then keep mixing until well combined. Add some of whipped egg whites to the egg yolk mixture and mix lightly. Once the small amount of egg whites is incorporated, fold the rest of the egg whites into the yolk mixture and fold gently.

Combine the almond flour with the baking powder and cocoa, then add the dry ingredients gradually, into the egg mixture, and combine carefully as to not deflate the mixture or break down the egg whites. Don’t worry about it being perfectly blended! Fill greased muffin cups about half full to allow for rising.

Bake at 325°F for about 18 minutes until cupcakes rise and slightly crack on top and toothpick comes out clean. Recipe makes 16 cupcakes.

Soften cream cheese, then combine with heavy cream using a mixer. Once thoroughly combined, add the pudding mix, Splenda packets, and small amounts of water as necessary to get desired consistency.

Recipe makes enough to frost two batches of the above cupcakes and may be stored in the refrigerator for future use.

Enjoy, and let us know how you like these delicious treats!