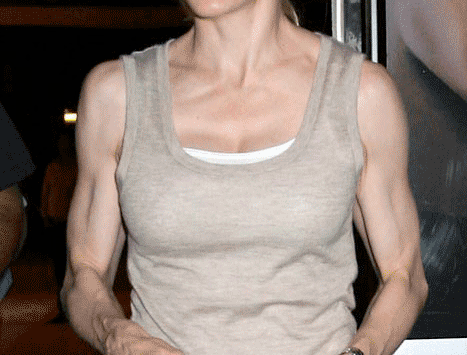 I got an email last night that really made me think. It came from one of my clients (currently preparing for a competition), and it’s below (with her permission, of course):

“I’m so excited, I can barely stand it. You won’t believe this comment I got at the gym today! The training manager who sees me on a regular basis came up to me as I was leaving, and said, ‘You better slow down or you’ll be looking like Madonna in another couple of weeks.’

I nearly fell over and automatically responded with a ‘Thank You.’ He smiled back and said, ‘I’m glad you took that as a compliment, but Madonna’s not looking very feminine these days. She’s much too lean to look healthy, you should look at some pictures when you get home!’

I know how she looks, and I think she looks great! She’s extremely lean, and that’s what I want. I’m excited because I still feel healthy and so full of energy, but also hard and tight, and I adore every part of the way it feels. I don’t care what “feminine” means to everyone else, but to me, I feel on top of the world!”

When I first read that message, I got very excited for my client. I know that she’s making the progress she wants, and since that super lean and muscular look is what she’s after, it makes me happy that she’s well on her way to obtaining it.

But a part of that message just didn’t sit right with me, so I couldn’t help but start analyzing it.

I kept getting stuck on the fact that the average gym goer will never find this type of look healthy. Beauty is in the eye of the beholder, and the most important thing may be the fact that she feels confident and comfortable in her own skin, but this goes deeper than that.

Most people who see some of the newly “buff” female celebs are NOT loving their appearance, and not just because they may view muscles as being “masculine.” Those whom I’ve informally polled on the topic are completely convinced that the super lean and muscled physiques these ladies sport actually promote eating disorders, excessive exercise, and generally spread the same kind of unhealthy body image (especially among young girls) that the emaciated super models have spread over the years.

Naturally, someone living the fitness lifestyle may take offense to that idea. We do our best to take good care of our bodies, and we don’t obsess over exercising, or every bite of food that enters our mouths, quite the same way that those same supermodels do, right?

Do we stare in the mirror, at the reflection of a perfectly fit, healthy body, and see nothing but fat and cellulite where there is none, the way someone with serious body image issues might?

It goes further than that, too.

I remembered a phone conversation I had with a girlfriend a few months back. She was literally on the verge of tears because she just couldn’t for the life of her figure out how to get that “four pack” she was sporting to turn into a “six pack.”

“I despise being out of shape, and I deserve a six pack; I’ve been counting each gram of food that enters my mouth for much too long to…”

Her rant was interrupted by her seven year old daughter dropping her cup, spilling water all over the floor. The little girl had been there the entire time, listening to her mother ‘s frustrations of being “out of shape,” as demonstrated by her apparent lack of a complete six-pack.

Sound like a healthy attitude for a child to be around? I didn’t think so.

I don’t have any kids of my own, but I’m pretty damn sure that I’d want my daughter growing up in a world where every woman sports a year-round six pack and stomach veins about as much as I’d want her to be raised by a woman who’d convinced herself that she’s “fat” at size 2.

Lean Muscle vs Skin and Bones

While seeing Hollywood stars embrace a slightly more muscular look over the “skin and bones” appearance that was all the rage just a few years ago is different, it’s not necessarily better.

Madonna, for instance, has proudly proclaimed that she spends over three hours each day working out, in addition to pilates. Her trainer had also been quoted as saying that she consumes under 800 calories a day to maintain her super lean physique.

Now, think about this with an open mind. Can we really get offended, upset, or even surprised at the general public rejecting the muscular and lean appearance when considering what those who’ve made that look “mainstream” put their bodies through to achieve it?

Whatever happened to balance, anyway?

Is there no middle ground?

I like to think that we’ve got it figured out around here; that to us, life is about so much more than looking for newly emerging veins, or thinning skin. To me, living the fitness lifestyle means being fit inside & out. But how can you be fit on the inside, when you’re so obsessed with your six-pack that you don’t even think of the consequences such obsession may have on the innocent mind of a little girl?

One thought on “The Fitness Lifestyle: an Unhealthy Addiction?”